“I can hear fine, it’s just that everyone mumbles”

If this statement sounds familiar, or you know someone who says this often, it is likely that hearing loss may be present.

The role of an audiologist is to measure hearing, identify hearing loss and establish a program for rehabilitation.

Audiologists are responsible for evaluating clients and diagnosing specific auditory disorders through specialised tests. These tests are followed by the implementation of a treatment or management plan.  Common techniques used to treat auditory disorders may involve the use of a hearing aids and or assistive listening devices.

Hearings aids are devices which are designed to amplify sound for the wearer, usually with the aim of making speech more intelligible.  You don’t have to be profoundly deaf to benefit from hearing aids.

Below is a table comparing degrees of hearing loss and its impact on speech understanding and communication.

As you can see below, even a mild loss can affect speech comprehension, resulting in the patient asking for multiple repeats.  The intention of the hearing aid is to improve audibility, to make things clearer, thus allowing the wearer to enjoy conversations with minimal effort. 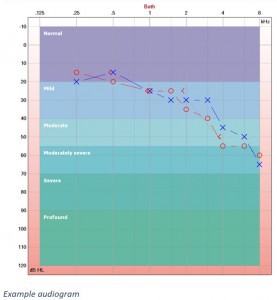 Shane (not his real name) is 45 years old. He’s worked on a construction site for a number of years. Now he is based full time in an office environment.

He reports that in meetings he does have difficulty hearing, and finds that he has to concentrate really hard to hear what is being said.  Shane also tells us that he performs well one-on-one in a quiet environment. But nonetheless, when there are a number of people speaking it is difficult to understand the conversations going on at the same time.

He also finds that he has to increase the volume of the television to make his programs easier to hear.

How To Read An Audiogram

Below is Shane’s audiogram and he has very good low pitch hearing. However for the high pitches, the hearing slopes from a mild to a moderately severe hearing loss in both ears.  His hearing loss is greatest in the high pitch, which is responsible for the clarity of speech. Shane’s hearing results are consistent with his reported hearing problems of:

If you rearrange the alphabet and place it on the audiogram above, certain letters fit within specific regions within the audiogram. For example, letters such as “b” and “d”, are letters that carry more bass emphasis, as opposed to “k” and “f” which is found within the high frequency region.

In Shane’s case, his hearing loss slopes well below the normal region in the high frequencies, hence his inability to clearly hear high frequency letters.  And in the case of the low frequency letters, he manages quite well. Shane requires a hearing aid that provides audibility/volume in the high pitch to improve the clarity of speech and to minimise the “mumbling” sounds he is hearing.