Putting the Sound In Movies

Did you know a piece of top-secret military technology changed how we enjoyed the movies forever? We look at sound in movies.

From the first moment flickering images were projected on a screen, filmmakers wanted to add sound to the experience.

The first attempt was sound on disc. These were giant records 16-inches in diameter (the modern LP is 12-inches across). The projectionist had to perfectly time the playing of the disc to the running of the film.

Sound on disc system revealed a number of challenges:

Let There Be Light!

Toward the end of the First World War, researchers working with the US Navy proved the concept of optical sound for ship-to-ship communication. The process involved converting sound waves to light, transmitting the light, and converting back to sound.

The idea of adding a sliver of lightwave to a film was the next obvious step. It instantly overcame the issue of synchronisation. Sound could be recorded at the same time as the action, making it easier to reshoot and splice in scenes.

The concept was deceptively straightforward - an electric lamp, called an 'exciter', shines through a translucent waveform printed on the edge of a film strip. When the light shines through the film, it is read by a photosensitive material and fed through a processor. The processor converts the photovoltaic impulse into an electrical signal which is then amplified and converted into sound waves through a speaker.

Did you know our brains also use electrical signals to process sound?

Check out the first couple of minutes of this 1943 documentary for an overview:

Then the race was on by competing manufacturers to perfect the technology to create faithful sound reproduction - something which sound-on-disc did very well and early sound-on-film did not.

You might also be surprised to learn that the movie studios weren’t particularly enthusiastic about sound for the movies.

Some had unsuccessfully invested significant sums in technology that didn't work, others were quite content to continue with the silent films as they always had done. Still more considered the idea that adding sound was a novelty that would quickly wear off (as it did much later with 3D).

However, many of them did recognise the importance of a musical score, so sheet music would often accompany the reels if the movie house didn't have a record player.

In February 1927, an agreement was signed by five leading Hollywood movie studios: Famous Players-Lasky (soon to be part of Paramount), Metro-Goldwyn-Mayer, Universal, First National, and Cecil B. DeMille's  Producers Distributing Corporation (PDC). They agreed to collectively select just one provider for sound conversion.

In the end it was Vitaphone - a sound-on-disc system - which heralded the beginning of the talkies. Al Jolson’s The Jazz Singer is credited as the first ‘talkie’, although the only dialogue was a couple of ad libs by Jolson himself.

The first sound-on-film, Sunrise, was also released in 1927 and it used Fox studio’s Movietone system. It featured a soundtrack and special effect sounds but until the following year was the first real sound-on-film talkie, Mother Knows Best, released.

*Do you know the name and the date of release of Hollywood’s last silent film? The answer is at the bottom on this article.

Far from being a novelty, talking pictures took the world by storm. Eventually sound on film became the standard but that was not the end of the format wars. 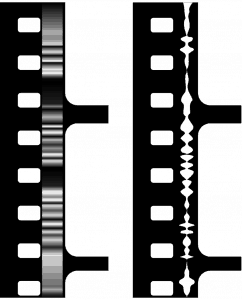 In the end the variable width became the standard which would not change for another thirty years until the introduction of stereo. In the end that was simply done by adding the second channel to the film print.

There had been attempts at creating stereo sound prior to this but it relied on magnetic sound, but it wasn’t as reliable as the sound-on-film system.

The optical soundtrack on a Dolby Stereo encoded 35mm film, carries not only left and right tracks for stereophonic sound, but also—through a matrix decoding system —a third center channel, and a fourth surround channel for speakers on the sides and rear of the theater for ambient sound and special effects.

Another 20 years later, in the 1990s, Dolby Digital emerged, still using the sound on film technique perfected a little over 100 years ago.

*Answer: The 1935 film Legong produced by Paramount Pictures which was set and shot in Bali.

Hearing aids which have been correctly configured for your hearing loss can make going to the movies enjoyable again. In addition, most cinemas in Australia have a variety of systems, including closed captions, infrared and hearing aid loops, to help people with hearing loss.

Here is what the major movie chains offer patrons:

Hearing aid manufacturer Oticon has a great guide on how to use a telecoil.

And, to wrap up, here are some of our favourite ‘silent’ films and film about the silent movie era:

Leave us a comment below to share your favourite classic film. We'd love to discover a new title.