Telecoils and how they work 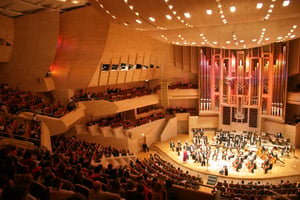 Going to a concert, attending a lecture or going to a house of worship can be a challenge when you have difficulty hearing.

The good news is that in conjunction with your telecoil hearing aid, many venues have special systems to help called hearing loops - or, more technically, an audio induction loop.

They work by sending an alternating electrical signal through a metal loop in the road. When a vehicle is stopped in the loop, metal parts from the car increases the loop’s conductance. This is then picked up by the traffic light signals.

In the case of audio induction loops, the electromagnetic signal is the sound from a microphone. It is amplified and sent through a looped cable around the perimeter of the auditorium.

When you switch your hearing aid to its Telecoil setting, you’re getting the signal from the microphone.

This means you’re hearing the sound directly and not distorted over distance. That means not distracted by extraneous sounds which can be exhausting to process.

The history of Telecoils

You might be surprised to know that Telecoils date back to 1937. They were the invention of Joseph Poliakoff, a Russian telecommunications specialist. He fled from Communists in the 1920s with his family and established a highly successful hearing aid company in Queensland.

Another of Poliakoff’s inventions you’ll be familiar with is the beeping pager. This clever family has gone on to other great achievements. Polikoff’s grandsons - Sir Martyn Poliakoff is an award-winning chemist while his brother, Stephen Poliakoff is a BAFTA-winning director-playwright.

Where to find Telecoils

Hearing loops are either permanent or temporary installations used in venues including theatres, cinemas, places of worship, airports, convention centres.

To know whether a venue has an induction loop, just look for the logo, or ask someone in attendance.

Tagged under: About Hearing Aids, General