Why do television commercials seem louder than the programs?

Are TV commercials truly louder than the program? We investigate here.

We’ve all experienced it - we’re sitting there, engrossed watching our favourite TV show. It jumps to a commercial break and we jump!

Why are TV commercials so much louder than the TV shows?

It’s mostly an issue of perception.

A Bit of Psychology

Filmmakers use a wide range of sound to help bring light and shade to their visual storytelling. Even the most action-packed adventure film is not wall-to-wall car chases, gunfights and explosions. There are also quieter moments where, for instance, the hero reveals his sensitive side.

In the case of documentaries and the news, the ‘soundscape’ doesn’t vary much, so any change between the program and the advertisement is far more obvious.

Television commercials are not subtle, their sole role is to make you look and remember the product.

So they use a variety of techniques from hyped narration, catchy music  and bright graphics.

But that doesn't mean the sound is louder than the surrounding program. 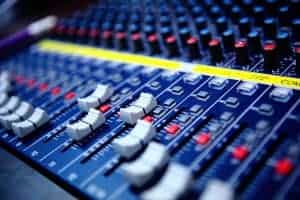 TV commercials may seem louder than the rest of the programming, but it might not be.

There are two sets of obligations both the networks and the advertisers have to follow.

Firstly, TV networks must comply with the requirements of an organisation called FreeTV which  is the industry body that represents the Free-to-air Australian TV networks including the ABC.

The Operational Practice Notes 48 (Audio Levels and Loudness) and 59 (Measurement and Management of Loudness in Soundtracks for Television Broadcasting) are guidelines for measuring and matching the loudness of programs, and advertisements, in an attempt to avoid excessive loudness contrasts.

Secondly, advertisers or their agencies have to submit commercials to Free TV’s Commercials Advice (CAD) for review prior to broadcast and it must comply with the Operational Practice Notes outlines above.

But that doesn’t stop advertisements on TV from being annoying.

What can you do about it?

There isn't much you can do, apart from being quick on the remote control. Many people are watching DVDs of their favourite shows, going to alternatives like Netflix or exclusively watching programming on the ABC.

TV manufacturers are also looking at new technology. Some televisions have an auto volume function equalises the sound. Other entrepreneurial people have created devices you can plug-in to your TV but they do come at a cost.

If you are still concerned about TV advertisement volume, you can make a complaint to the regulatory bodies.