Hearing aids have come a long way since the old ear trumpet.
We take a look the advances that have been made over the past the 120 years.

Hearing technology has come along way since the very earliest attempts to correct hearing loss.

Hearing aids as we know them today are a result of two important pieces of miniaturisation - electronics and batteries. Without the exponential advances in these two areas, it’s doubtful that we’d see all the hearing aid success stories we see today.

Another contributing factor is a sad one - war.

Both First and Second World Wars created both a demand for hearing loss treatment, as returning soldiers sought help for noise-induced hearing loss from the battlefield. Manpower and resources, along with the drive to invent and implement new technologies, resulted in fresh ideas and new innovations.

But let’s begin at the beginning.

An early 19th century picture of a gent using a hearing trumpet.

The man credited with describing the first hearing device was a French Jesuit priest and mathematician Jean Leurechon. Diagrams are found in his work Récréations Mathématiques.

As the name of the book suggests, it was filled with recreational maths puzzles. The book, written under his penname Hendrik van Etten, was translated into several languages including English and was popular all across Europe.

Harnessing the power of electricity and the newly developed telephone was the next great advance.

American Miller-Reese Hutchison used both to create a hearing device for one of his friends. It was a tabletop device which meant the speaker and the listener had to be seated across from one another. It was powered by a large bulky battery. While it was impractical for commercial application the akouphone, as it was called, pointed the way forward.

The 20th century marks the beginning of the modern hearing aid.

Seven years after the Akouphone was developed Miller refined his idea further. The batteries were smaller and not very powerful. And those batteries had to be changed often.

Miller was also a bit of a showman and arranged for Metropolitan Opera lead soprano Suzanne Adams to singing to clients wearing his ‘Acousticon’ device. It also impressed Queen Alexandra of Denmark who suffered from hearing loss. She was so pleased with the results that Miller was invited to the coronation of her husband, Britain’s King Edward VII.

Guglielmo Marconi’s radio invention did more than just being wireless entertainment to the masses, the vacuum tube which was the heart of the radio started to be used in hearing aids.

With vacuum tubes, hearing aids could increase sound levels by as much as 70 dB, unfortunately, they didn’t discriminate on the types of sound was picked up.

By now hearing aids were now the size of a small box - better than the tabletop variety, but still not exactly portable. 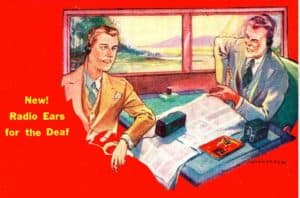 Hearing aids became wearable for the very first time thanks to the further miniaturisation techniques by Aurex. Like modern hearing aids, the receiver came from a wire from the device directly to the ear.

The unit itself could be placed in a large pockets - which is fine if you’re a gent, but a bit of a problem if you’re a lady.

The solution was to strap the battery pack to the user’s leg.

Batteries got much smaller again thanks to the drive to improve electronics during World War II. By the end of the 1940s, button batteries and printed circuit boards combined into one unit that could genuinely fit in a pocket with wires going to individual earpieces. 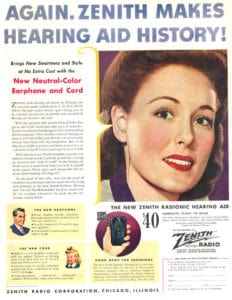 Transistors made hearing aid units as small as a transistor radio.

The end of the war saw Raytheon engineer Norman Krimm turn his weapons research to consumer electronics and explored the applications for transistors.

Hearing aids were an obvious choice. By 1952, Krim was able to create junction transistors for hearing aid companies. This miniaturised hearing aids even further and it meant that, for the very first time hearing aids could be worn either inside the ear or behind the ear.

Within the first year of release more than 200,000 new transistor hearing aids were sold - and the era of the vacuum tube hearing aids was officially over.

Other notable events in this year - Sri Lanka defeats Australia to win the Cricket World Cup. Data sent back by the Galileo space probe indicates there may be water on one of Jupiter's moons

Miniaturised computing power and even better batteries fuelled the new generation of hearing aids. Digital processing was the new frontier and during the 1980s, hybrid digital-analogue models were created but going full digital took until 1996 when Widex released the first fully digital hearing aid.

Other notable events in this year -  NASA announces that liquid water has been found on Mars. Queen Elizabeth II becomes Britain's longest-reigning monarch.

The 21st century is all about making connections and the internet, in conjunction with the development of wireless technology. Bluetooth technology means conversations, television audio and phone calls can be streamed directly into the ear. Manufacturers were first to work with Apple on streaming technology, but in 2018 Phonak released a game-changing model that genuinely make the most of Bluetooth in hearing aids, making it compatible with both Apple and Android phones.

Wireless streaming also enables remote clinic support which will become more common and more comprehensive as we go into the 2020s and beyond.

The future is all about the Internet and like so many electronics, hearing aids are likely to be swept up in the “Internet of Things”.

This means your future hearing aids will be able to tell when you’ve taken a fall and summon medical assistance. You’ll be able to better program your aids and fine tune your aids. You might be able to travel and receive English language translation directly into your ear.

No matter where the future leads - the drive for better hearing is going to be loud and clear.

Tagged under: About Hearing Aids, General