Modern Solutions when you only have one working ear – CROS/BICROS

Single-sided deafness (SSD) refers to a condition where a person has usable hearing in one ear only. The poorer ear does not receive benefit from traditional hearing aids, whilst the better ear may have normal hearing, or a hearing loss. People with SSD may have difficulties in picing upo the direction of sounds, detecting speech on their poorer hearing side, and difficulties hearing in the presence of background noise. Fortunately there are modern solutions to help these patients. One such solution is the CROS/BiCROS system.

What is a Bi/CROS system? 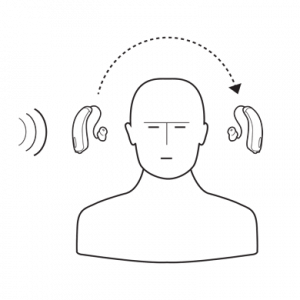 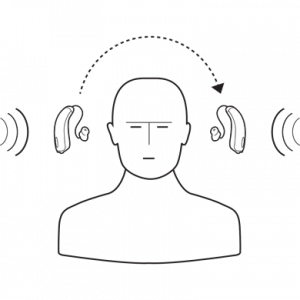 Currently there are a few manufacturers offering wireless BiCROS/CROS solutions: Phonak, Starkey, Widex , Signia (Siemens) and most recently Oticon. While each company utilises their own technologies, the end-goal is the same: to enable the wearer to hear sounds coming from their poorer ear in their better hearing ear. Some brands like Phonak and Signia also have in the canal models available, for those who are concerned about cosmetics.

Successful CROS users will find several improvements to their daily communication difficulties. These include an improved ability to hear people when speaking to their poorer ear; an improved ability to hear in background noise (if speech is coming from the poorer side); and better awareness of sounds in the environment. Unlike other SSD solutions, the CROS/BiCROS is easily fit in the audiologists’ office and does not require any surgery. Since the CROS/BiCROS device does not amplify sound to the poorer ear, it is unlikely that users’ will experience a significant improvement in ability to localise sounds. Some clients do however report subjective improvements in localisation ability.

Examples where Cros/BiCros is of benefit are:

So gone are the days, where you had to make sure you have people sitting on your "good" side.

It is impotant to note that this system will not reduce tinnitus in your bad ear as there is no direct stimulation to the poorer hearing ear.

NOTE: Wireless CROS/BiCROS systems use a lot of battery power, so hearing aid battery life might only be a few days. Phonak and Signia have hower released rechargeable models, which addresses this issue very effectively, giving full day use before a charge is required.

Modern CROS/BiCROS devices are suitable for most people with SSD. Potential candidates will have one ear which cannot be aided by traditional hearing aids, and one ear which has good speech understanding at either normal, or elevated volumes. The better hearing ear may have normal hearing, or a hearing loss. It is suitable for those who want to hear more clearly when people are speaking to their poorer ear, and for those who do not wish to have surgery. Another advantage of the CROS is that it is normally much cheaper to get an aid and a CROS than two hearing aids.

If you think you may be a candidate for the CROS/BiCROS system, then feel free to book an appointment to discuss this option further with one of our specialist audiologists.

How To Manage Single-sided Deafness